Have you ever looked at a Masonic Cornerstone or a formal Grand Lodge document and noticed that there are two different years on it?
One year should be easy to recognize as it is the calendar year and following the year is A.D. (e.g. 2020 A.D.) which is Latin for Anno Domini which means ‘in year of our Lord”. Normally we write the year, and very rarely add the A.D. Now, there may be times when you will see C.E., but that is another discussion…
The other year will look quite different, with a year such as 6020 and will be followed by the initials A.L. which is Latin for Anno Lucis. Anno Lucis means “in year of Light”. The Anno Lucis date is used for Masonic dating or the Masonic calendar. This year is usually used for our ceremonial or commemorative occasions.
Converting the year from Anno Domini to Anno Lucis is quite easy. Simply take the year (i.e. 2020 A.D.) and add 4,000 and it becomes 6020 A.L.
If you have been a Mason for some time, this should be common knowledge for you but I would like to go a bit deeper and explain an interesting aspect of Masonic history that has been largely forgotten and the meaning behind the Anno Lucis year.
Anno Lucis, or “in the year of Light”, represents the symbolic moment that light came into the world at its creation. As found in Genesis 1:3 KJV, “And God Said,” Let there be light: and there was light”. In the early days of the Grand Lodge of England, when they started using Anno Lucis it was sometimes referred to as in the year of Masonry. But, how did they know precisely when God created light in the world?


In the 18th and 19th century it was accepted and common knowledge by most people of the English-speaking world that God Created the world at nightfall on October 22, 4004 B.C. They knew that for it was printed in the Bible. The two men who responsible for that were the Archbishop of Ireland James Ussher and publisher Thomas Guy. Now for the rest of the story... 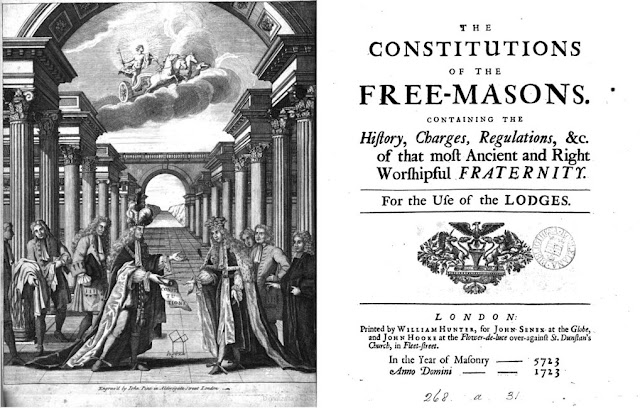 Posted by All Things Masonic at 2:32 PM No comments: