The secret of Mentoring in a nutshell 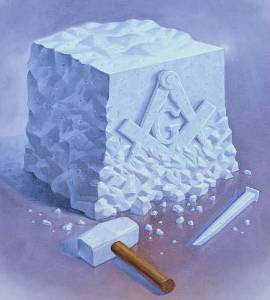 I was reading "A PASSION FOR EXCELLENCE" BY Author Tom Peters the other evening. I came across a passage that I thought that had a direct application to the Mentoring or coaching of the new Masonic Brother.


"Coaching is face to face leadership that pulls together
people with diverse backgrounds, talents,experiences and interests,encourages them to step up to be responsible and continued achievement, and treats them as full scale partners and contributors. Coaching is not about memorizing techniques or devising the perfect game plan. It is really paying attention to people-
really believing them, really caring about them, really involving them"......


I think our goal is to guide them to their own success....
Mentoring our Brothers who succeed and live the Masonic life is our legacy...Dont you think?
Posted by All Things Masonic at 8:38 PM No comments:

Some Random thoughts on Mentoring.

1. To Mentor is to instill in the new Brother a sense of purpose and to help them develop their Masonic identity.

2. The Entered Apprentice stands before you and may be thinking; "Here I am ...I am a rough Ashlar in need of improvement. Place your working tools in my hand and teach me their uses.

3. Coaching is teaching what a new Brother needs to know to be proficient. Thats pretty cut and dry. What we really need to do is support and nuture him and help him achieve his goals in Masonry.

4. Adding a new member to your lodge also adds to your circle of Friends.

5. Our teaching as Mentors will live beyond our lives. Our Mentoring is our gift to our lodge and to the Craft. It becomes our legecy.

Posted by All Things Masonic at 5:01 PM No comments: 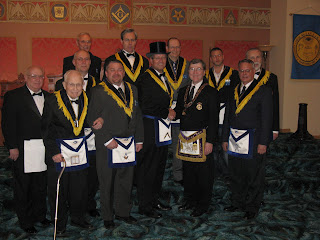 These are the newly elected and appointed Officers of Cataract Lodge #2 of St Anthony Falls . The Installing Officer was the Most Worshipful Grand Master of Minnesota Masons, Thomas McCarthy.
We are fortunate at Cataract. We have all the chairs filled with interested and dedicated Masons.
This truly is a home for me. Its a place filled with my Brothers where every time we meet it's a home coming.
At Cataract #2 we have a long and deep Masonic tradition. We received our Charter Febrary 14,1852. Even before Minnesota's Statehood.
Posted by All Things Masonic at 7:05 PM No comments:

Who were the two Masonic Brothers who exchanged cannon fire that started the American Civil War? And where did the battle take place?
· Confederate General P.G.T. Beauregard, Master Mason- Knight Templar New Orleans Louisiana
· Union Major Robert Anderson, Master Mason Trenton New Jersey
· The battle took place on April 12-13, 1861 at Fort Sumter South Carolina.
Here a few facts that are not commonly known about them or the battle.
· General Beauregard and Major Anderson knew each other very well. As a matter of fact Major Anderson was Beauregard’s Instructor at the US ARMY military academy West Point before the war.
· Approximately one month before the battle, they exchanged gifts of cigars and whiskey.
· The battle itself lasted over 34 hours.
· Thousands of Artillery rounds were fired at each other AND……..
· No lives were lost on either side.

This is just one of many such short articles I have written with Grand Lodge Education Officer Ed Halpaus and Glen Kiecker, a fellow lodge member of mine, and we both cheerfully serve on the Grand Lodge Education Committee together.
If you like short articles like this, you’re going to love our Masonic Monday Questions and answers at http://www.mn-masons.org/Page1002.aspx.
Once you go to the site, you can sit at your leisure and pick and choose from over 150 such Questions and Answers.
If you like them, feel free to print them and pass them out at your Masonic coffees or card games. Feel free to use them for your lodge education program.
Let us know what you think.
Posted by All Things Masonic at 8:55 PM No comments: