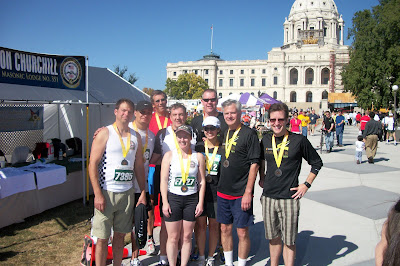 The Masons and OES Women who ran the marathon should be congratulated. They are; Andy Rice, Daniel Akins, Chris Taylor, Roberto Gardiner, Peter Hulbert, Krista Benninger, Leslie Collins and Stoffel Reitsma  It was a wonderful day and the eight listed are all Champions and Victorious in their personal efforts. While I may have been personally sad that I couldn’t participate in the event in the way I wanted too, I was energized and excited to be able to support and encourage my Brothers and Sisters and all the members of our community who ran in the event and displayed a commitment to their own well being. Well done everyone.
Posted by All Things Masonic at 9:51 AM No comments:

Wont you join me?


We need your help to reach our goal of raising $10,000 to help strike out Cancer

Checks should be written to MN Grand Chapter OES. “Cancer Dance” in the memo.
Reservations must be received on or before October 8, 2011.

Ill be there! Show up lets talk, if you shake my hand you can have a GrandMasters Pins or a pint or a cup.
Posted by All Things Masonic at 7:05 PM No comments:

Are you having this much fun? 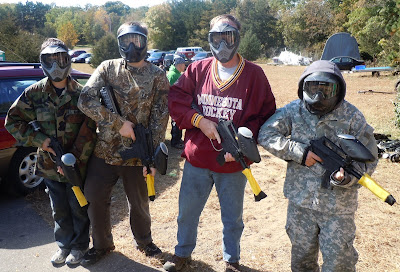 The Grand Master of Minnesota (me wearing the Maroon Minnesota jacket) and Minnesota DeMolay at their annual Paint Ball outting.
What a great time I had with the young men.

Now this sure beats talking about the light bill or snow removal from the parking lot. Are you doing something like this? Why not.

Young Men and old Men love to do the same things.....What a great day!

Posted by All Things Masonic at 4:31 PM No comments: