A Test a Masonic Story

Several years ago, the story is told of a Mason who always wore his Masonic ring and lapel pin when in public.
On some occasions, he rode the bus from his home to the downtown area.
On one such trip, when he sat down, he discovered the driver had accidentally given him a quarter too much change.
As he considered what to do, he thought to himself, "You'd better give the quarter back. It would be wrong to keep it."
Then he thought, "Oh, forget it, it's only a quarter; who would worry about this little amount.
Anyway, the transit company gets too much fare; they will never miss it.
Accept it as a 'gift from God' and keep quiet."
When his stop came, he paused momentarily at the door, then he handed the quarter to the driver and said, "Here, you gave me too much change."
The driver with a smile replied, " I noticed your Masonic ring and lapel pin.
I have been thinking lately about asking a Mason how to join. I just wanted to see what you would do if I gave you too much change.
You passed the test.
Can you tell me how to become a Mason?"
When the Mason stepped off the bus, he said a silent prayer, "Oh God, Great Architect of the Universe, I almost sold you and my beloved Masons out for a mere quarter."
Our actions are the only Masonic creed some will ever see.
This is a really almost scary example of how people watch us as Masons and may put us to the test even without us realizing it!
Always be diligent, whether it be at the theater, restaurant, grocery, service station or just driving in traffic.
Remember, whether it be a lapel pin, a ring, or an emblem on the car, you carry the name of our great fraternity on your shoulders whenever you call yourself a Mason.
You never can tell who might be watching!
Posted by All Things Masonic at 4:28 PM No comments: 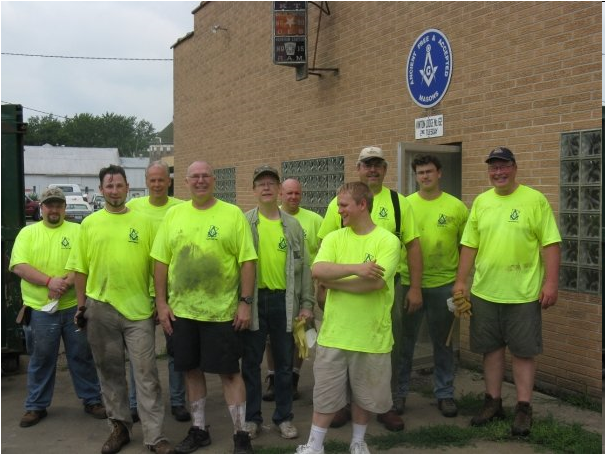 While on a shopping trip to purchase a gift I came to understand that first appearances can have a lasting effect on a person.
Not so long ago I wanted to purchase a very special gift for someone in my family. The store was in the Mall of America. I drove to the Mall and parked my car in the parking ramp just outside of the Nordstrom’s department store. I walked into the store where I was very warmly greeted by one of the store employees. I heard the comforting homey sounds of a piano being played. I saw the piano by the escalators. The pianist was wearing an emerald green formal dress and had a beautiful smile on her face and she played a lite classical piece.

As I walked past the perfume counters. I could feel the scents wrap around me and crept into my nose have a very warm and pleasing effect. As I looked around I realized that the Nordstrom company worked very hard using colors and tasteful décor, carpeting and highly

Polished floors, sounds and salespeople to create a sense of well being. Nordstrom’s wants their customers to feel good so they may linger and spend more time in the store and spend more money and feel that their visit was a satisfying experience and will want to return.

I had a similar experience the first time I walked into a small Bait and Tackle store near Birchwood WI. I was greeted by the owner; the shop was as neat as a pin. The merchandise was professionally arranged in a manner that it was very easy to find things. Even the fat head minnows looked happy. I knew that this was my kind of place. My first impression was that I would get good service and advice. The cost of the purchases was what I expected and my time will not be wasted. I had become a good customer over the years.

I think that we can take the principals from my two stories that “First impressions are important” and apply them towards our Masonic lodges and meeting places.
Ask your newest members what their first impressions are. When they stood in front of the building did they find the building neatly maintained with an attractive sign? What is their impression when they walk inside? Is the building well lite, and neat and clean and tastefully decorated? I suggest you develop a list of these first impressions and determine what some of the changes would be a benefit and develop a plan for achieving them and set a time for when they will be accomplished.

We want our lodges to be places where the members feel comfortable, and satisfied with the time they spend there. We want members to take pride in their lodge and think of their lodge as a special where they will return often and be an active member.
Good first impressions are tough to beat!
If you are interested in a check list to analyze your lodge Id be more than happy to send you one. Just e mail me or give me a call.

Posted by All Things Masonic at 6:36 PM No comments: