The Faithful Few
By Unknown
When the meeting's called to order, and you look around the room;
You're sure to see some faces, that from out the shadows loom,
That are always at the meeting and stay till it is through.
The ones that I would mention, are the Always Faithful Few.

They fill the vacant offices, as they are always on the spot.
No matter what the weather, though it may be awful hot;
It may be dark and rainy, but they are tried and true;
The ones that you rely on are the Always Faithful Few.

There's lots of worthy members, who will come when in the mood;
When everything's convenient, they can do a little good;
They're a factor in the order, and necessary too,
But the ones who never fail us are the Always Faithful Few.

If it were not for these faithful, whose shoulders at the wheel,
Keep the order moving onward, without a halt or reel;
What woud be the fate of Orders, who have so much to do,
They surely would go under, but for the Faithful Few.
Posted by All Things Masonic at 10:38 AM No comments: 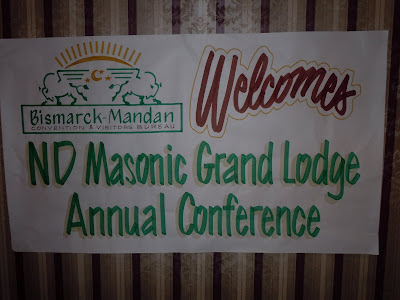 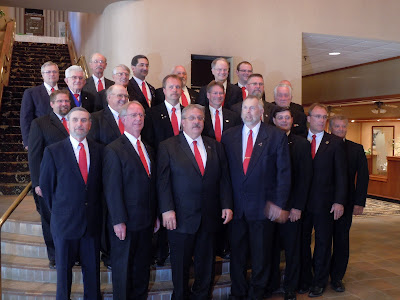 I attended the 122nd Annual Communication of the Grand Lodge of North Dakota. It was held on June 17th and 18th in Bimarck North Dakota.

Out going M.W.Brian Burkett did a great job as Grand Master this past year.He had a diffcult job traveling this winter in the middle of Winter blizzards, and having to work long hard hours during this Springs flooding.

In coming Grand Master Lon Kvasager is going to have a outstanding year as well.Im the lucky one this year.For Lons paths and mine will cross many times this year. He is one of the guys I love to just sit and talk and laugh.This is very unusual. Normally contact with other Grand Masters who you have become friends is usually reserved with phone calls and text messaging.
PERFECT EXAMPLE The Grand Master of Nebraska watches the weather channel and he text messages me every time it snows in minnesota........
North Dakota is a place I love to visit and a great place to be a Brother.
Best Wishes LON !
Posted by All Things Masonic at 6:58 PM No comments: 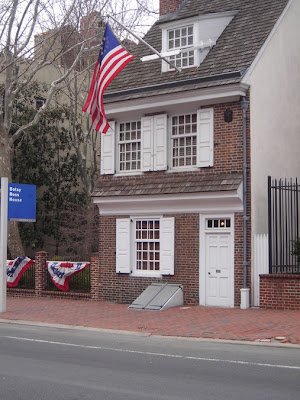 Presidential Proclamation--Flag Day and National Flag Week
On June 14, 1777, the Second Constitutional Congress adopted a flag with thirteen stripes and thirteen stars to represent our Nation, one star for each of our founding colonies. The stars were set upon a blue field, in the words of the Congress's resolution, "representing a new constellation" in the night sky. What was then a fledgling democracy has flourished and expanded, as we constantly strive toward a more perfect Union.
Through the successes and struggles we have faced, the American flag has been ever present. It has flown on our ships and military bases around the world as we continue to defend liberty and democracy abroad. It has been raised in yards and on porches across America on days of celebration, and as a sign of our shared heritage. And it is lowered on days of remembrance to honor fallen service members and public servants; or when tragedy strikes and we join together in mourning. Our flag is the mark of one country, one people, uniting under one banner.
When the American flag soars, so too does our Nation and the ideals it stands for. We remain committed to defending the liberties and freedoms it represents, and we give special thanks to the members of the Armed Forces who wear our flag proudly. On Flag Day, and during National Flag Week, we celebrate the powerful beacon of hope that our flag has become for us all, and for people around the world.
To commemorate the adoption of our flag, the Congress, by joint resolution approved August 3, 1949, as amended (63 Stat. 492), designated June 14 of each year as "Flag Day" and requested that the President issue an annual proclamation calling for its observance and for the display of the flag of the United States on all Federal Government buildings. The Congress also requested, by joint resolution approved June 9, 1966, as amended (80 Stat. 194), that the President annually issue a proclamation designating the week in which June 14 occurs as "National Flag Week" and call upon citizens of the United States to display the flag during that week.
NOW, THEREFORE, I, BARACK OBAMA, President of the United States of America, do hereby proclaim June 14, 2011, as Flag Day and the week beginning June 12, 2011, as National Flag Week. I direct the appropriate officials to display the flag on all Federal Government buildings during that week, and I urge
all Americans to observe Flag Day and National Flag Week by displaying the flag. I also call upon the people of the United States to observe with pride and all due ceremony those days from Flag Day through Independence Day, also set aside by the Congress (89 Stat. 211), as a time to honor America, to celebrate our heritage in public gatherings and activities, and to publicly recite the Pledge of Allegiance to the Flag of the United States of America.
IN WITNESS WHEREOF, I have hereunto set my hand this tenth day of June, in the year of our Lord two thousand eleven, and of the Independence of the United States of America the two hundred and thirty-fifth.
BARACK OBAMA
Posted by All Things Masonic at 10:17 PM No comments: