The World's Oldest Man is a Freemason (and from Minnesota) 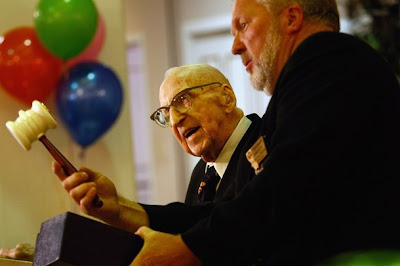 Here are a few interesting facts about about Brother Walter:

Walter was born in Melrose Minnesota on September 21, 1886.

His earliest memory is hearing his Grandfather speak about fighting with the Union Army during the Civil War.

Brother Walter only had two jobs in his life. His first job he moved to Great Falls Montana in 1918 to work on the expanding railroads. He worked on the railroads for 50 years. When he retired he became Manager/Secretery of his local Shrine Unit. When he turned 99 he retired from that job.
Brother Walter is a 33 degree Scottish Rite, and all of his Masonic organizations are in Great Falls, Montana.
In the photo, Junior Grand Warden Tom Duffy of the Grand Lodge of Montana is presenting a George Washington gavel. The gavel is from Potomac Lodge #5 in Washington D.C.
The Grand Lodge of Montana plans to return to celebrate Walters 114th birthday. Walter said "OK Ill be here."
If you click on the link it will take you to a website developed by the Great Falls Tribune to comemmorate Brother Walters birthday. Its has a lot of nice photos and contains some of Walter's secrets to long living.
Oh by the way.....the retirement home that Walter is staying has 12 women who are older than Walter. It must be the water in Montana, huh?
Posted by All Things Masonic at 8:14 PM