The Lost Symbol in China 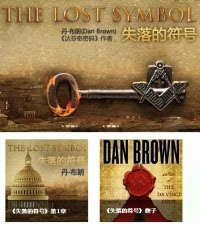 Dan Brown's latest novel has sold two million copies in the United States, Britain and Canada since the book was released on September 15.

The Chinese copyright belongs to the People's Literature Publishing . They are expecting that the Chinese edition is expected to hit the shelves in early 2010.
But Chinese Internet users won't have to wait much longer. The pirates are already working hard to exploit Dan Brown's popularity to make a profit.
It is believed that the book has been "crowd-sourced" translated. The prologue and several chapters of the Chinese translation is already on the Web. It has been reported that the English version of the book has been scanned and put into a PDF format for unrestricted downloading. This is on a Web site as well.
( I was able to find Web sites that may have had the books but it was in Chinese so I was unable to verify this information).
These actions in my opinion seriously infringe on Dan Brown's copyright and damage China's reputation to protect intellectual property rights.
Posted by All Things Masonic at 7:20 PM