Past Grand Masters of Minnesota 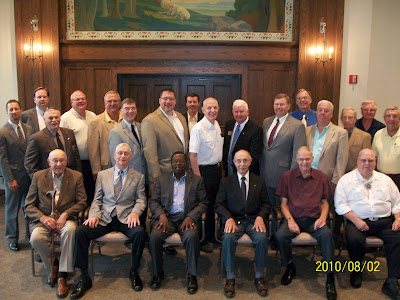 This is the second year the Past Grand Masters of Minnesota have met for Lunch. It's a very simple gathering, but it's a very warming and caring time. The photo you see shows our Past Masonic leaders for over the 37 years.
It was great to see the Past Grands together in one place for a couple of hours. Many dropped their regular activities of the day to gather, some from far away. We talked about a lot of things, but it was a time to reach out and look into each others' eyes and share about what is happening in our lives that's important. We talked about Ralph Holquist and his battle with cancer, and mostly how we miss him. Others shared about the memorable events in their year as Grand Master. It certainly was special and I don't plan on missing next year's or any other, for that matter. They are all my Masonic Fathers.
Posted by All Things Masonic at 8:04 PM