The Cross and Crown 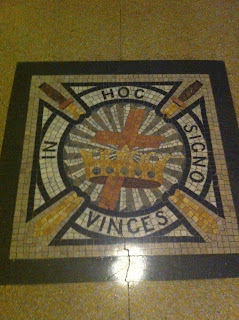 A couple of weeks ago I was in Cincinnati Ohio for the American Legion National Convention. It was during the Parade of States that I walked past the Cincinnati Masonic Temple. So two days later when I had a little free time I went back to the Temple and met my old friend Past Grand Master Mike Himes of the Grand Lodge of Ohio.
Mike gave me a tour of their 8 floors, 350,000 square foot Masonic Building. It is a beautiful building that has beautiful Blue Lodge Rooms, Royal Arch Chapter Rooms, Commandery Rooms, Easter Star Rooms, and the Scottish Rite Theater that holds 850 people.
The image above in inlayed in the floor as all the Masonic bodies emblems as you get off the elevator on each of the floors.
This is the Cross and the Crown which is the Commandery Symbol. It is commonly interpreted as a reminder that death is not final but we will continue on victorious after death.
The words Hoc Signo Vinces were used by Constantine meaning By this sign thou shall conquer.

Posted by All Things Masonic at 11:13 AM