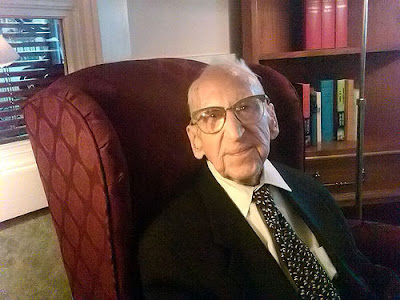 The Worlds oldest man Walter Breuning of Great Falls Montana has layed down his working tool and walked out the West gate at 114 years.

He passed away of natural causes in a Great Falls hospital. He has not been feeling good most of April.

Walter was born in Melrose Minnesota on September 21 1886.

Walter has requested no funeral service. He asked that donations be made to the Shriner's Hospital and to the Scottish Rite Language Disorder Center.

I know Walter will be missed by his Brothers. I was at a few Masonic gatherings and heard stories about Walter from a few Past Grand Masters that knew him.

Posted by All Things Masonic at 3:09 PM