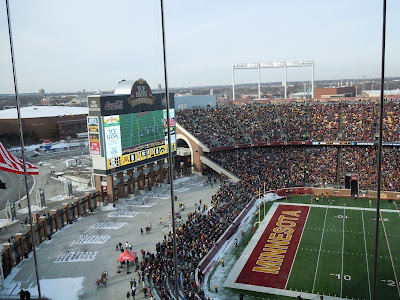 The tradition continues! Except this year with better results. For those of you who may not remember I'll refresh your memory.

Last year around December 30th, the Most Worshipful Grand Master of Iowa Masons Craig Hummel challenged our beloved Grand Master Tom McCarthy to a very friendly non-monetary wager. Ya see the Minnesota Gophers were about to play the Iowa State Cyclones at the Insite Bowl in Tempe Arizona. The winner of the bet was to supply the loser of the bet with the appropriate shirt and hat to wear at the Loser's Annual Communication.

Well ,my Minnesota Golden Gophers lost to Iowa State in a very close game 14 to 13. The rest is history. Our Grand Master, Deputy Grand Master and myself donned Iowa State Gear for at least 15 minutes during our Grand Lodge. I am sorry I won't show those pictures here.

So this year Our Grand Master John Cook invited The Most Worshipful Grand Master Craig Davis to be his guests at the last game of the year at the Minnesota vs. Iowa University game.
The game was at the TCF Stadium on the U of M campus.

As you can see the Grand Master took the opportunity to show off our new Gopher Stadium and the President's Club had all of the amenities. I thought our Grand Masters strategy was brilliant. Treat them special and they will take it easy on us if the Gophers lose. I didn't think it looked too good for us. The Gophers had fired the Coach in mid season, and we were like 2-9 for the season.

After lunch we had a cold hard slap of reality. Grand Master Davis and Past Grand Master Jack Butler provided us with large gift bags. I was afraid to look into it....When I gazed inside I saw a tee shirt, hat and other Iowa University garb. Yup the standing bet from last year was still in effect. Well I left my bag at the table and went to find my seat. Ya see, I was hoping that someone would steal it.....when I returned at half time it was still there.

So take a few minutes and look at the pictures for they tell the story. But it was a great afternoon of Brotherhood and a lot of laughs. It was one of those afternoons that was filled with special moments that will be never forgotten and enjoyed for many years to come. 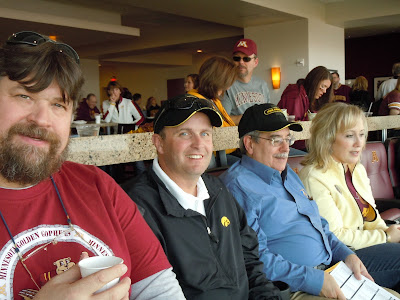 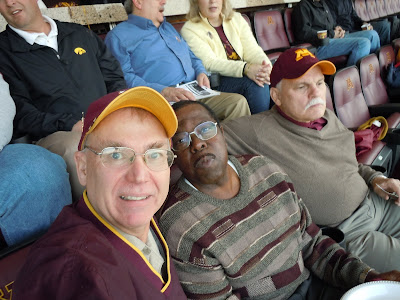 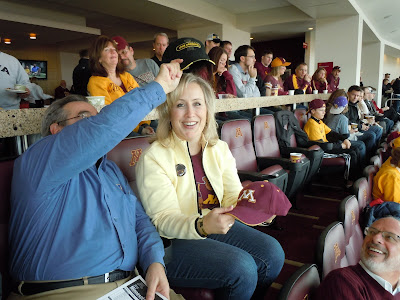 Like I said there was a lot of horse play. 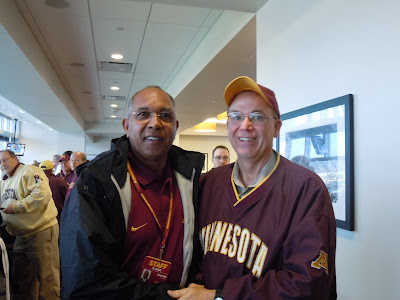 I was going to go look for a cup of coffee and maybe a small dessert when I ran across Coach Tubby Smith. Tubby is the Gopher Basketball coach. I approached him and acknowledged that he was probably pretty busy and asked him if he had time to pose with me for a photo. Well we talked for over five minutes! So I asked him I could introduce him to my Grand Master. 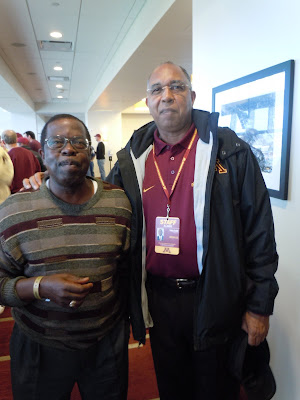 So the Grand Master and I had a few more minutes with the Coach. His face lit up when we told him we were Masons! He shared some very special stories with us. 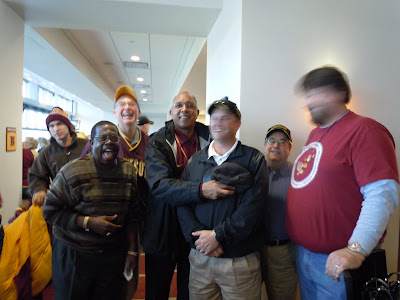 Here you see Tubby covering up the Iowa Hawkeye symbol on Craig's Jacket. That was so funny. Jack had brought jars of his home made rhubarb jam and presented a jar to Tubby. 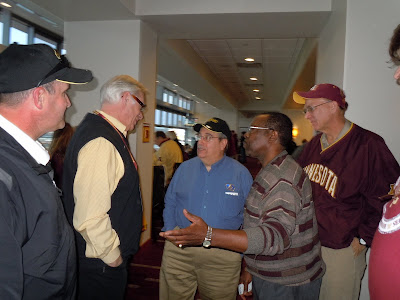 A little later in the day the University of Minnesota President Robert Bruininks stopped by. He recognized John and me as being from the Grand Lodge of Minnesota. Wow what a great memory.
I'm not sure what's going on in this picture..but I think Jack ran out of rhubarb jam?
What really happened a few minutes later is that Craig and Jack tried to put an Iowa Jacket on President Bruininks. Steve Johnson had the camera and refused to take the picture....another round of laughter. 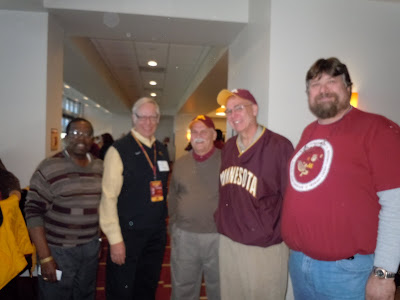 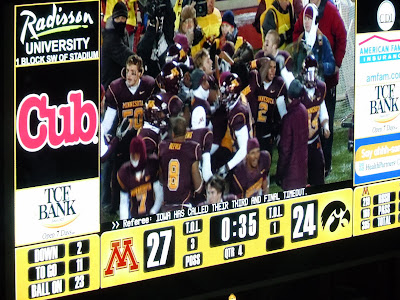 This was the best part of the entire afternoon. My Gophers played a cliff hanger of a game but they pulled it off. 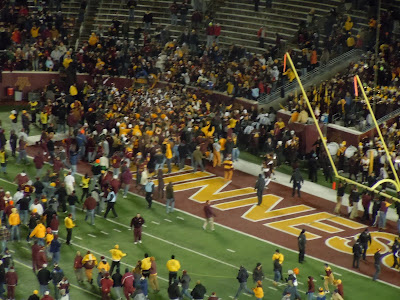 You can't see it in this photo. But the players just claimed the trophy of the Game "Floyd of Rose ville". Floyd is a very heavy bronze statue of a pig. It was a pretty big deal to us fans because Iowa has held on to Floyd since 2006. The Trophy tradition goes back to 1935. But Minnesota and Iowa share a very long tradition of playing football together since 1891.
I was going to rush the field, but the Grand Master called my name............. 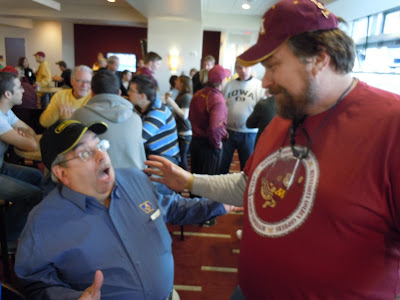 I caught this photo just as I heard Brian say "Come on Jack" and then Jack repeatly saying "No No Not That!" 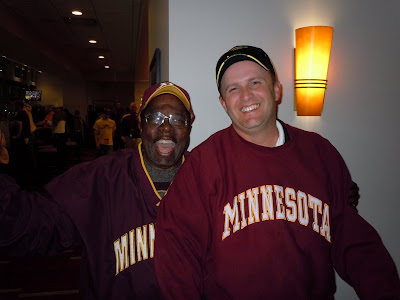 The payoff!!! The Most Worshipful Grand Masters of Minnesota and Iowa!
Posted by All Things Masonic at 6:45 PM