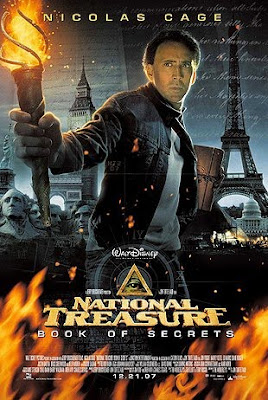 Attention National Treasure fans! I have good news. It was announced earlier this week that the Disney Corporation is planning for the third installment of National Treasure and the film is in the making and speeding ahead.
The film will have a very established production staff. The Director is Jon Turtelbaub and the screen writers are Carlo Bernard and Doug Miro. They have just finsihed up the Disney movie with Nicolas Cage in "The Sorcers Apprentice"
It is my understanding that Nicolas Cage will return to play the adventurous archaelogist and historian Benjamin Gates. Actors Justin Bartha, Dian Krugerand, Jon Voight are also expected to return.
The movie is expected to be released sometime in 2011.
I am going to go out on a limb very early even before the movie is even written and predict the plot of National Treasure Three. My prediction is based on a clue that was given to us in "National Treasure Book of Secrets."
If you recall from the plot line of the movie, there was a book kept by the President of the United States for the eyes only of the Presidents following him. This book was passed from President to President. This book contained all the answers to the biggest secrets in American History.
In the movie, Benjamin Gates (Nicolas Cage) convinced the President to tell him where the book was kept, and the President told him that the book was in the Library of Congress. The President then directed Ben Gates to read Page 47.
At the end of the movie the President asks Ben about what he read on Page 47 of the Book of Secrets, Ben replied, "It's life altering, sir." Of course we dont know what that information is, but that might be the starting point to the new movie.
I am anxious to learn more about National Treasure #3. I hope that film director Jerry Bruckheimer and actor Nicolas Cage will bring incredible surprises from Page 47 of the Book of Secrets. Whatever it is I'm sure it's going to be another cliffhanger.
PS at this stage there has been no mentions of Freemasons in the Movie. But its very early to tell.
Posted by All Things Masonic at 1:44 PM