IT WAS A GREAT DAY 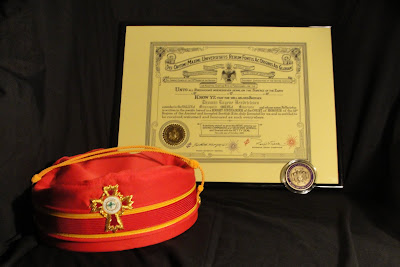 On Saturday October 24th I was the recipient of the Knights Commander Court of Honor. It was a day that I will never forget. My thoughts and emotions are swirling around my head at 90 mph. So Im having alittle trouble finding the words to describe my experience.

So I thought I would share a few photos and words to give you an idea.....

In the background is my Patent. It is signed by Sovereign Grand Commander Ron Seale of the Southern Jurdisdiction of Scottish Rite. It was placed in my hands by my Illustrious Jerry Oliver and his personal Representive James O Burlingame- 33 Grand Cross Court of Honor. 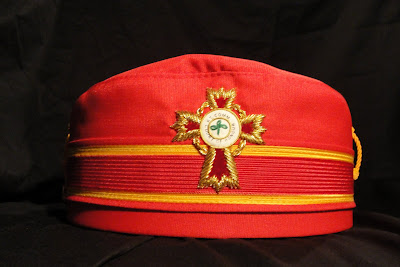 This is my Red hat. It was placed on my head by my Friend and Brother Brian Beerman 33 degree/Junior Grand Warden Grand Lodge of Minnesota. 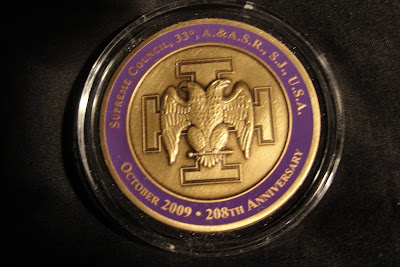 This beauitful medallion-pocket piece is causing me a dilemma. Inspector General Jerry Oliver personally made this a gift to celebrate the election to KCCH . He said that he going to present it to us when we received our Patent. So I promised myself during the cermony that I would carry it forever(even though I had not seen the medallion). After I sat down at my table and gazed upon this beauitful keep sake.
I dont want to take it out of its protective case for I wish to gaze upon its simple beauty and recall that beauitful ceremony. So all day I have had it in my pocket in its case to preserve it for alittle while longer. ( Jerry Oliver showed us his keepsake. It was very well worn and I know very treasured as mine)
These are a few thoughts and images that I wished to share with you .
PS I have made it a rule that I dont publish personal items in this blog. I could help myself
just practicing bragging rights I guess .

Posted by All Things Masonic at 7:07 PM