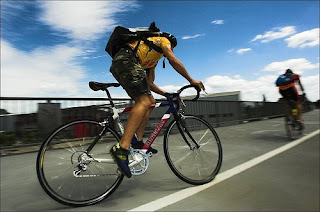 Man pedals across OhioBy BOB COUPLAND Tribune Chronicle
POSTED: June 5, 2009
James ''Spudd'' Sasak, 53, of Grand River, pedaled through Trumbull and Mahoning counties this week as part of the 1,250-mile, 26-day trip. He is the bicycle ambassador for the Grand Lodge of the Freemasons for Special Olympics Ohio and is taking part in the Masonry in Motion bicycle tour.
''This is for a great cause. There has always been a tight tie between the Freemasons and Special Olympics,'' he said. Masons raise money to help send children to the Special Olympics, he said.
For the trip, he loaded his Cannondale T700 bicycle named ''PigBike'' with 90 pounds of clothes, rain gear and a computer. His riding wear included a bright yellowish-green shirt imprinted with the words ''Going the Distance Ohio Special Olympics.''
The trek will take him around Ohio's border counties, from the Cuyahoga County Courthouse in Cleveland on Monday, around the state until he's in Lorain at nearly the starting point, and then south to get to the Special Olympics on June 26 at Jesse Owens Stadium at The Ohio State Campus in Columbus.
He traveled along the Greenway Trail to Trumbull County, which had him traveling past where his grandparents' farm once stood in Ashtabula County.
Sasak decided to mark the tour with a stop at each county courthouse. He tries to arrive at each courthouse by either noon or 6 p.m. each day.
''The courthouses are some of the most spectacular sites in each county,'' Sasak said.
Local Masons are helping to provide lodgings. Business sponsors, donations and T-shirt sales help pay for the trip.
By the time this trip is over, Sasak said he will have pedaled 30,000 miles in his lifetime.
''Distance bicycling has been one of my great passions for almost 30 years,'' he said.
He did adventure cycling in the 1990s, but this trip is the first time he has challenged himself to keep a schedule on a bike riding. His first bicycle tour was in 1980 from Cleveland to Boston.
''Bicycling is the most amazing way to see the country,'' Sasak said.
Sasak said he went to the Special Olympics for the first time last year.
''It was the most amazing thing I have ever seen. They play the sport for the pure joy of playing the sport. When you are with the Special Olympic kids, you know you are in a special place filled with love,'' Sasak said.
Ron Gordon, one of the local Masons in Trumbull County who hosted Sasak, said statewide, the Masons gave $200,000 last year to sponsor Special Olympics.
bcoupland@tribtoday.com
I was at the Grand Lodge of Ohio last fall and met several members of the Special Olympics Bike Team. I was very impressed. The Grand Lodge of Ohio is very dedicated to supporting the Special Olympics, as I am.
I'm thinking that this winter some Minnesota Masons should go jump in a frozen lake to support Special Olympics. Then next June some Minnesota Masons should do the MS 150 and ride a bicycle from Duluth to Minneapolis..............Are you interested in joining me?
Posted by All Things Masonic at 8:00 PM