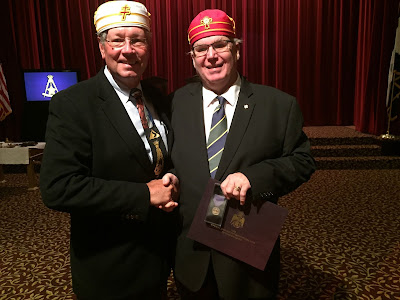 On Thursday September 20, 2018 I received (photo above) a diploma and medal for completing Program III, Scottish Rite Philosophy. I described the program this way. " When I started Morals and Dogma, Albert Pike and I entered into a ten month relationship. As the days together whizzed by I fell in love. Somewhere during the 6th month, I had a major disagreement with him and I walked out. Three months latter, I was able to return with a new perspective, and complete the program."

All kidding aside, I can truly say that studying Morals and Dogma provided a rich and valuable insight into the Scottish Rite, that I had never would have been able to receive by the dramas alone.

Now, this is not a course for the faint of heart.Don't think you're going to finish it in a couple of evenings or a week end. This course is a marathon, but anyone who has the desire to learn and some discipline can do it. For, with much toil, there are great rewards.

I used to be a runner until an injury stopped ended that for me. When I was running, I often found myself looking out the window at work, anxiously waiting to get off work, to go for a five to seven mile run. After a few weeks with Albert Pike, I found myself with almost the same feeling. intensely, anxiously waiting to crack open the cover and look at the questions, to see what I would discover, or the problems to ponder.

I had already completed the Scottish Rite Program I, The Symbolic Lodge, and Program II, Scottish Rite Historical and Ritual. Those courses were informative and enjoyable.

I have now completed the trifecta, as I call it, but with the Minnesota winter coming I'm not sure how I will spend those long Winter nights. I'm debating between learning Latin or returning to snowshoeing. 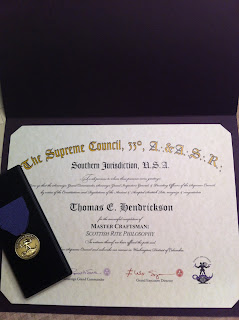 Posted by All Things Masonic at 6:06 PM