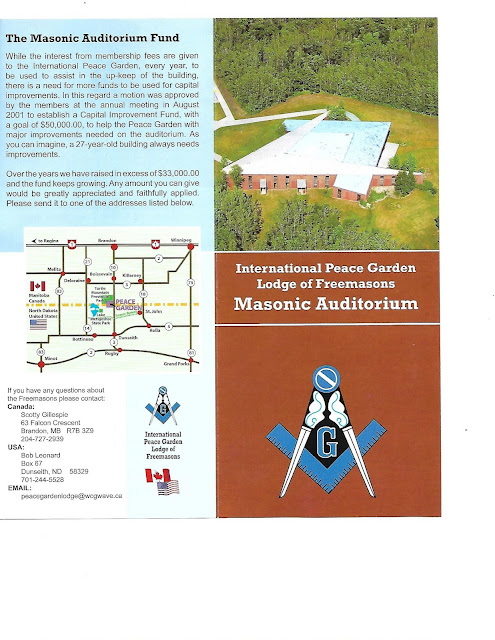 On August 12, 2017  The Annual Meeting for the Peace Garden Lodge will be held. I have been there twice, Its in beautiful surroundings and the only building in the Shape of a Square and Compass in the world Im told. I have taken information from my blog post from a few years ago to provide much more information. Life Membership is only $50.00 you may want to consider it. Its the only Lodge I know that has an American Lodge Treasure  and a Canadian Lodge Treasure.

The International Peace Garden is 2,339 acres situated on the border between Manitoba and North Dakota, on the longest north-south road in the world and almost at the geographic centre of North America. It was dedicated on July 14, 1932 and has become a living monument symbolizing the two nations living in harmony along the longest unfortified boundary in the world. The Garden is a non-profit organization which is supported by, among others, several fraternal organizations: Freemasons; Order of Eastern Star; Oddfellows; Rebekahs; Daughters of the British Empire (IODE), and Knights of Columbus.
The International Peace Garden Lodge of Freemasons was formed in 1993 with Warrants granted by the Grand Lodges of Manitoba, North Dakota and Minnesota. The Grand Lodge of Saskatchewan became a chartering Grand Lodge in 2000 by motion of the members. Its purpose is "to promote and enhance fraternal relations among Freemasons of North America and to assist in the expansion and maintenance of the International Peace Garden."
Membership in the International Peace Garden Lodge of Freemasons is open to any Master Mason for a once-in-a-lifetime fee of $50.00, providing the Mason is, and remains, in good standing in any jurisdiction in the world which is recognized by the chartering grand jurisdictions. At the time of this writing, total membership is over 835 with members from Canada, the United States, Great Britain, Norway, Australia and the Bahamas.
Membership fees are placed in trust and may not be used for any purpose other than to generate interest which is used to defer operating expenses of the Lodge and other such expenditures as may be approved at the annual communication.
An annual meeting is held at the Peace Garden, usually in the Burdick Center for the Performing Arts, on the Saturday before the second Sunday in August, with arrangements in charge of the Chartering Grand Lodges on a rotating basis. Officers' titles and positions as well as the customs correspond to those of the Chartering Grand Lodge in charge of the arrangements in any given year.
The meeting deals with regular business and includes an inspirational speaker. Following the meeting, Masons and their ladies, usually enjoy some entertainment and a lunch in the Masonic Auditorium. If the meeting is tyled (for Masons only) there is a program arranged for the ladies.
The $775,000.00 Masonic Auditorium was dedicated in 1981 as a centennial project of the 20,000 Masons of Manitoba and North Dakota. It is built in the shape of the Square and Compasses and has seating for 2,000. It is the only building of its kind in the world.
Posted by All Things Masonic at 6:46 PM