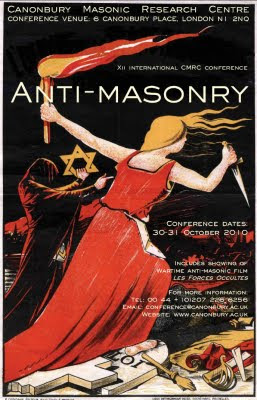 A new revealing look at the history of Freemasonry will be presented at an International Conference by the Canonbury Masonic Research Center in London England on October 30-31, 2010.

The keynote speaker, Dr. Patricia Kennedy Grimstead, of Harvard University, will present a lecture entitled "War on Freemasons: the fate of the Nazi and Soviet seized books and archives." The lecture will provide an overview of the millions of Masonic documents orginally stolen from the Masonic lodges by the Nazis during World War Two. Then during the Sack of Berlin, the documents were transported by the forerunner of the Soviet KGB and placed into the archives in Moscow.

For futher information and a downloadable program of this one-of-a-kind conference and details on how to register, go to the CMRCS website at http://www.canonbury.ac.uk/conferences/programme10.pdf

I wish I could attend this conference.
Posted by All Things Masonic at 2:24 PM