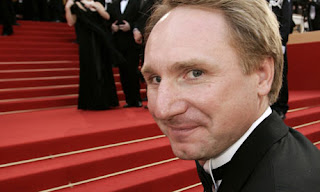 This is a photo of the popular author Dan Brown. Most of us are not familiar with his face or his name, but most of us recognize the books that he has written “Angel and Demons, The Da Vinci Code.
Dan Brown’s new novel …a work of fiction, is named “The Lost Symbol”. It appears that the overall premise of the novel is that it may be a very fast-paced book that is to take place over a 12-hour period. The setting is expected to take place in Washington D.C. and the theme is expected to be… That’s right …Freemasonry.
The publisher is Random House, a very popular publisher of books. The Publisher, Sonny Mehta, has informed the British newspaper “The Guardian.co.uk” that the book will be released on September 15, 2009 with an expected initial printing of 6.5 million copies. This may be the largest initial printing in Random House history….(If you listen carefully you may hear the sounds of cash registers ringing in the background.) Publisher Mehta tells us that the book “The Lost Symbol is going to be infused with history, secret codes and intrigue.
Personally I hope that Dan Brown’s new book does better for Freemasonry than the Da Vinci Code did for the scandalized work it did for the Catholic Church.
But then, we could always take a “wait and see” attitude. Who knows—it might just be a good summer read.
Posted by All Things Masonic at 8:10 PM